Countrystyle Welcomes Young Artists To The Circular Economy With The Future Foundry.

Countrystyle would like to express its congratulations to rising rallycross star Nathan Heathcote who proved his potential in the sixth round of the RX2 International Series at Loheac in France by setting fastest times and narrowly missed making the final after being spun by another driver. 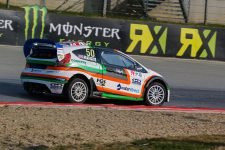 Racing in his first season of the official single-make support category to the FIA World Rallycross Championship, reigning MSA British Rallycross Champion Heathcote got his event off to the perfect start, setting the fastest time in Free Practice on Friday evening.

Driving for Swedish squad Team Faren, Heathcote is competing against a host of drivers with prior experience of both the Supercar Lites machines and the technical circuits on the calendar in 2018, but having tested at the famous Loheac circuit pre-season, Heathcote was able to hit the ground running in France. 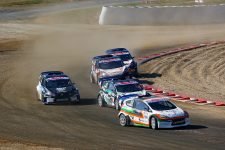 Third fastest in Q1, Heathcote still managed to be eighth and seventh in Q2 and Q3 despite jumping the start of his races and having to take two joker laps as penalty. He then fought back with second fastest in Q4 to secure a front row starting position for the semi-finals, but while fighting for his first final start of the season on the opening lap, the Ashford driver was spun another competitor, ruining his chances.

But, the former Swift Sport Rallycross Champion showed the kind of performance he is able to deliver, and left the French circuit, where 80,000 fans attended, happy with the overall weekend. “I’m really happy with my performance. It’s a shame to not get in the final again, but there’s nothing I could do about that. Going quickest in practice put me on a massive high and I managed to carry on, even with jumping two starts, which wasn’t ideal. To keep that momentum going and start on the front row for the semi-final was absolutely awesome,” said Heathcote. “I really wanted to get into the final and show what I can do, then just to have someone go an 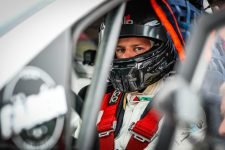 d just push you off the track, it’s quite heart breaking really.”

The final round of RX2 takes place at Cape Town in South Africa (November 24 – 25). “I’m going to think things over and hopefully start off at the last round in South Africa how I’ve left here and be straight on the pace and finally get into that final. The team has onboard footage and data from last year, so I’m going to work to learn as much as possible before we get there,” concluded Heathcote. 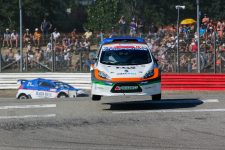